From ETCwiki
Jump to navigationJump to search 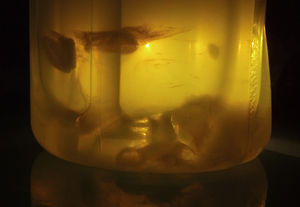 Today I purchased 2x 64oz Lemon Lime flavor Gatorade G2. I drink a lot of Gatorade, and have been drinking it for 25 years or so, but I had never seen a bottle like this. Inside my Gatorade G2 bottle were 2 large blobs of white slime floating around. After doing some checking, this is a very common issue with Gatorade, and it makes people sick enough to be hospitalized. I immediately tried to contact Gatorade to ask what this was. As I learned, this is a common event they deal with, and downplay it saying "It's just mold".

I am going to be updating this article when I receive the response from Gatorade. 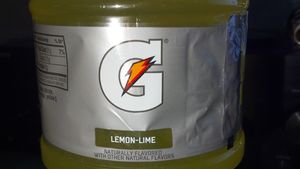 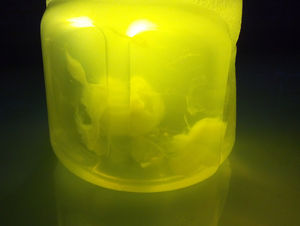 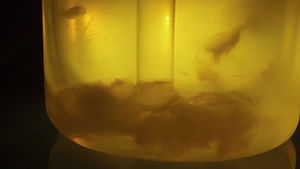 The white slime itself had a similar texture to fabric, tiny strands of white were interwoven to form a single mass or blob. Inside the strands were VERY tiny dark dots like specs of dust. As the white slime blob rotates it changes shape easily with the Gatorade currents around it. The blob in my drink stayed in the bottom 1/3 of the bottle. The Gatorade with the blob in it is slightly more translucent than a normal Gatorade solution, it diffuses less light. I would estimate the actual mass of the blob at 1-3 grams and the volume it occupies while in the bottle is about 1-2 fluid ounces.

My Bottle of Gatorade G2 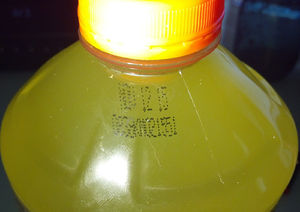 I called Gatorade that night after-hours, and noticed they have a medical emergency number available 24 hours a day to call, no explanation given obviously. Anyway, I waited for their normal hours and called the number again. I was connected to a random customer support rep, told her my problem, and she transferred me to her supervisor. I told this supervisor my problem, and he transferred me to his supervisor. I will not use her name, but she seemed very well spoken, she chose her words very carefully, and was very polite.

She went straight into some facts about mold, comparing this white blob in my Gatorade to a cheese that has grown mold. It sounds reasonable to me, mold is a fungus and fungus grows tiny white strands, potentially with tiny black spores. Either way, the nice Gatorade lady told me to send my unopened bottle of toxic Gatorade to them for analysis. They will send a pre-paid shipping box to my house with a sample release form that states the bottle is still mine, and I can have it back after analysis if I wanted.

After thinking about my experience, it is now pretty clear to me that Gatorade has had this happen before, probably many times.

What is the Gatorade white slime?

This section at this time is conjecture, I have not yet received the analysis from Gatorade.

Similar to this article

Related to this topic